A Free Life by Ha Jin 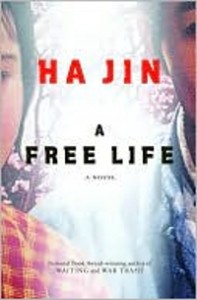 Free to do what? Immigrants who come here from China as Nan, Pingping, and Taotao Wu do have to make a living, make friends, chase the American Dream. Jin says first generation immigrants must struggle to survive and make a better life for their children who hopefully will assimilate, will know the language well, get good educations and careers, and become truly American. Nan went to Brandeis University, but when he and his wife, Pingping, are reunited with their son, he leaves graduate school and decides not to return to China after the Tiananmen Square massacre has occurred. The family must learn a new language, absorb a new culture, learn to deal with prejudice.

Nan wants to be a poet, but he hasn’t the safety of a good job, no matter how well educated he is, to afford him the leisure to write. But he does prosper to a great degree He is able to purchase a restaurant he has been employed in and works hard, long hours so his family can own a house of their own in an Atlanta suburb. But what he has achieved has chained him to a life of drudgery with a wife he doesn’t really love and a son who becomes Americanized to the point where he no longer respects his elders.

Jin does not write solely about the difficulties of immigrants but also about the need for the artist to create his art when struggling with adversity. Nan must write his poetry; he wants artistic freedom but is always stopped by exhaustion and pragmatic matters and what he tells himself is the lack of a muse to inspire him. He has never gotten over his love for Beina, the girl who spurned him in China, and he hopes to find her so he can at last write. When he knows he must write in English and not in Chinese, he realizes the need to improve his language skills and find an outlet for his poems.

Immigrant friends have found ways to display their art or write their novels, but he sees only mediocrity resulting. His ties to China are strong, but he is in a new country, and he must become a new person.

The themes in A Free Life are many. Jin writes about the hardships faced by the immigrant who must absorb the values, hopes and also the materialistic desires in a country and with a culture completely different from his own. He speaks of the artist who struggles to create when so many things stand in his way, and he reflects on the concept of family when Nan decides that Pingping and Taotao, his son, must come first in his life, before art, before intellectual freedom. Nan’s conflict over China is a major theme: China is his motherland, but he hates the repression and knows he can never go back. Most of all, Jin speaks of loyalty; the conflicted Nan struggles to find the American dream beyond its materialism, his need to make his family prosper, his wish to deal with his feelings about the tyrannical environment in China versus his ability to be free in America if he can only find the way, his yearning to write poetry in English rather than Chinese, his generational difficulties with Taotao who begins to look down on his parents, and mostly inner freedom, loyalty to himself, which he has never had before.

Jin’s prose is spare and relatively unadorned. But look out for the passages about animals that arise throughout the book and references to Doctor Zhivago that reveal much about Nan’s condition. ~