CABARET NIGHT AT THE ANDES HOTEL

By Judy GarrisonThere is no need to head for the Algonquin or Carlyle Hotels in New York City for a top flight evening of cabaret performance. You can enjoy a fabulous cabaret evening right here at The Andes Hotel on Saturday, February 23rd when Patricia Dell and Kent Brown present “Sing Happy! The Musical Genius of Kander and Ebb,” their tribute to the team that brought us the songs from Cabaret (1966/7), Chicago (1975) and, posthumously for Ebb, Curtains (2006)-currently on Broadway starring David Hyde Pierce. Composer John Kander and lyricist Fred Ebb worked together starting in 1965 and wrote for 11 stage musicals and 2 movies. The theme song from Martin Scorsese’s film New York, New York, later became a signature song for Frank Sinatra.

As in Dell & Brown’s tribute to the love songs of Richard Rogers at the Hotel this past November, you can expect a riveting and emotionally gratifying presentation by these two performers in the lovely ambiance of the Yellow Room, with a menu designed for the occasion by Chef Ed O’Neill. (The November evening was a sell-out, so we highly recommend advance reservations for this one). 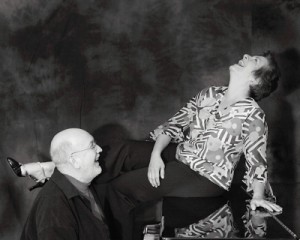 Patricia Dell, singer. actor, dancer and teacher, has during the last 6 years divided her time between Delaware County and New York City. Some may have seen her this fall as Mame in an Orpheus Theater production of Jerry Herman’s musical of the same name. Ms Dell played the diva Dorothy Brock in 42nd Street and created the role of Mrs. Stevenson in the world premiere of Jack Beeson’s one-act chamber opera (1996, premiered 1999). Sorry, Wrong Number. A visit to her website: www.patriciadell.com will acquaint you with many other of her musical theater roles. She is currently on the voice faculty at the Tisch School of the Arts, New York University.

Kent Brown, who has lived in Margaretville for 22 years has been a church organist since age 12. He is well known locally as Music Director of the Margaretville and Fleischmanns United Methodist Churches. He has also been music director for several musical productions of the Shandaken Theatrical Society and of the Margaretville Central School, and teaches piano privately. Expecting him to be piano accompanist only at the November cabaret performance, I was very pleasantly surprised to be totally charmed by his solos and his duet vocals with Ms. Dell.

I had a sneak preview of menu choices for the evening, and, like the original and scrumptious creations for the Richard Rogers night, Ed O’Neill had come up with a delicious themed array of small and big plate choices of both savory and sweet items. Here’s a peek: silken Jerusalem artichoke soup; smoked mozzarella and duck leg quesadilla; “Pu Pu Platter” of smoky wings, batter fried prawn, veggie empenadas, and Chinese-style riblets; classic lobster Newburg poached Maine lobster; seared Atlantic salmon; espresso crème brulee, cocoa dusted, burnt brown sugar. These are a tiny sampling of the choices, for small or large appetites, beef lovers and vegetarians, for eating solo or sharing. The Hotel will of course have its full range of drinks available.

Sally O’Neill gets kudos for producing yet another great event at the Hotel. Joanne Genelle, the Emcee for the evening, encourages women to think “Stork Club”, doff the snow boots and put on those high heels for a special night out. To the men, we say this is one of those occasions to treat yourself and your date or family to an out of the ordinary evening of music, song, and fabulous food. And as there is no dancing you don’t need to make excuses! Remember, February 23rd, doors open at 7 pm. Call 845-676-3980 or 845-676-4408 for reservations. ~