A LOVE AFFAIR BLOOMS IN ANDES 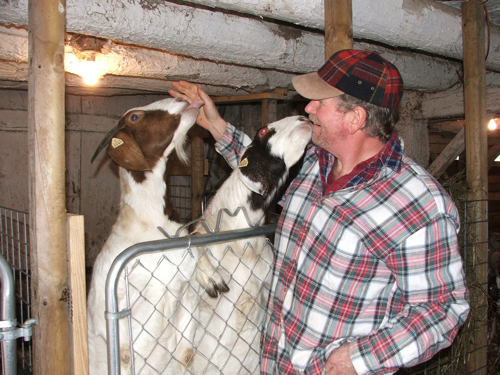 As Jack passes out licorice treats, the goats reward him with affection.

A bright yellow sign nailed to a tree on Route 28 announces “Boer Goats” to all who drive by. Making a call to the phone number on the sign, I was immediately aware that Jack and Sue Doig were thrilled to talk about this new endeavor at their farm.

Lanark Farm has been in the Doig family since 1850. Named after the area in Scotland from which the family’s ancestors had come, for most of its existence Lanark was a dairy farm. Jack took over after the death of his grandfather in 1972, and he began thinking in a different direction. The Doigs began their Natural Beef operations in 1973, starting with Polled Herefords, a breed of hornless red cattle with white faces. A decade or so later, Black Angus were added, followed by other breeds in differing colors. One might think a change like this came about as a means of producing a better or more diversified product line, but the truth is, Sue wanted to see a variety of colors on the rolling hills outside her windows. Whatever the reason, they run a successful business supplying fresh, natural beef to a very loyal customer base. 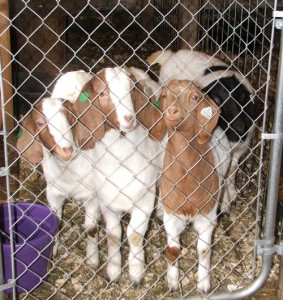 Curious Boer goats press their noses against the fence to see what is going on.

It is easy to see that farming is in Jack’s blood. Yes, I was there to hear about goats, but seated comfortably in the homey living room of their farmhouse, I needed to hear about what came before. Jack tirelessly answered my questions about the raising of cows, enlightening me about so many aspects of the business including feed, schedules, grazing patterns and the inevitable fate of these fine animals. The sparkle of pride never left his eyes. Snuggled on the couch with a warm cup of tea grasped in her hands, Sue made it apparent that, despite her busy real estate career and little involvement in the day-to-day operations at Lanark, she is a farmer, too. Additions, minor corrections to Jack’s story fit in easily with our conversation.

Then we moved on to the goats.

A couple of years ago, Jack retired from SUNY Delhi and wondered, “What next?” He had been delivering hay to Shadyhills Farm in Delancey, owned by Bob and Jeanne Basmajian, and they introduced him to their herd of Boer goats.

“Awesome animals,” Jack exclaimed about these meat goats. He went on to explain that over 70% of the world’s population uses goat as their primary meat source, and that America currently imports 1.5 million pounds per week. Research shows that it is considerably lower in calories and fat than meats used more traditionally in the United States, such as beef, pork and lamb. Boer goats are a good source for this meat, as they are the largest goat breed. A buck could grow to a weight of 300 pounds, while a doe could reach 200 pounds.

Both Jack and Sue fell in love with the breed, and with a desire to not only raise them for meat, but also to “help other individuals who want to get into Boer goats,” last summer they started their herd. Being novices, the first five goats they bought were only partial Boers, but since then they’ve been acquiring purebred, registered Boer stock. Their herd is up to 21 now, with six kids being born to the “mixed breed” goats. By early March, the ranks will swell again; 6 of the registered goats are expecting babies. The Doigs mentioned that this could mean as many as 12 new kids, since Boers are prone to deliver twins at their first birthing. Over time, Jack plans to phase out the mixed breed goats and focus on only the purebred stock.

Some of the new babies will eventually be sold as “seed stock” to assist in the building of other herds. This is especially true for the doelings, but since we all know that you can’t have a baby without both a mama and a daddy, some lucky bucklings will also get a chance to take part in the breeding process before they “go into the curry pot”, as a fellow Boer goat breeder expressed to Jack. For the most part, the males will be raised on the farm until they are sent to slaughter.

Meanwhile, Jack says, “While they’re here, they’ll have a great life.” These fun, curious animals live in a goat’s paradise. There is plenty of space, both indoors and out, filled with feed bins and large wooden spools and even a teeter-totter. Like children, the goats do get bored with the same old toys, so Jack will regularly change them from lying flat to standing on end, and the goats will roll them around like log rollers. As we talked, the phrase “circus goats” came into my head, and what a fitting term. I watched in delight as a group of Boers chased each other around one of the pens, taking turns jumping up onto the wooden spool, in what appeared to be a game of man-on-the-mountain or musical chairs.

Lightning quick, they cavorted about joyfully, causing my photos of this amusing scene to appear as nothing more than blurs.

Sue explained to me about the incredible social structure of the breed. “If there are five goats, one is #1, one is #5, and that doesn’t change.” She notes that Jeannie is the queen of their herd, and that every goat knows his or her place. A lot of bullying goes on, particularly when a new goat is introduced and the positioning is adjusted to take in this new member. Because of this, it is considered “almost inhumane” to bring in a single goat rather than a group of goats. Romeo, a young buckling in the Doigs’ herd, was beaten up so badly by the does when he arrived that he “went in a corner and hung his head in shame.”

Fascinating animals. After spending some time in the barn with Jack and Sue watching these lively goats, holding the newborn kids, stroking their heads, I asked them how they could manage to tear themselves away and get anything else done. “It gets cold out here,” Jack tells me, adding, “I’m not sure what will happen come spring.” ~