Oxalis Triangularis. Even the name is intriguing. The color is a deep mahogany. The shape of the leaves is like three triangles joined at the apex. Tiny, delicate, lavender flowers reach out to the sun. At night, the leaves fold together and look like velvet butterflies, hovering over the greens of the nearby houseplants on the table, in front of the window. The oxalis is the focal point. 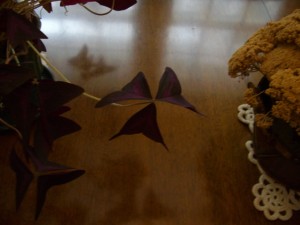 Leaves of an Oxalis Triangularis (photo by Alan Galowitz)

Being indoors gives me a chance to study each plant, see the pests before they become invasive, and be able to wash them off. The bhougansia that Marlys gave me at the end of the summer, and which she warned me attracted aphids, is running true. Although, as she suggested, I have been spraying it every day with water to which a tiny bit of dish detergent is added, the aphids keep returning. I hope I can nurse it through the winter until it can be outdoors where it will be happier. The avocado, which is now a small tree, also suffers through the dry household environment of winter. It’s harder to spray that plant because it’s so tall and its branches far reaching. Spraying the plants helps not only them, but humidifies the rooms they and we inhabit. The added humidity keeps us from getting dry, itchy skin. The plants themselves create a healthier space, absorbing the toxins and filtering out pollutants. The more vigorous the plant, the more air it can filter, according to NASA scientists.

What shall we do with those beautiful gifts of flowering plants received for the holidays? Cyclamen and azalea require good light but not direct sunlight. Soak them well from below to prevent rotting of the base of the plant. Feed with houseplant food weekly during the flowering period. After flowering, reduce watering and stop feeding until the foliage turns yellow. In late May, place the pots outside on their sides and keep them dry until new growth appears in summer, when the corms should be repotted and watering and feeding resumed. Bring the plant indoors in mid-September. (Or buy a new one!) I haven’t had much success with poinsettia reblooming nicely but you may have better luck. After flowering, allow the plant to dry. After the leaves fall, cut back the stems to four inches above the soil. Keep in a cool spot. In May, repot and begin watering and feeding it. Remove some of the new growth, leaving only the strongest branches. From late September, cover the poinsettia at night, giving fourteen hours of total darkness for at least 8 weeks, which will initiate flowering. Then start the light and water regime. (Or buy a new one!)