The O’Connor Foundation has awarded a 1-2 matching grant of $200,000 to the Andes Public Library and Community Center renovation and expansion. The foundation will match all monies raised after October 24, 2007, $1 for every $2. We are very grateful to the O’Connor Foundation! Donations and events are already making up the match. 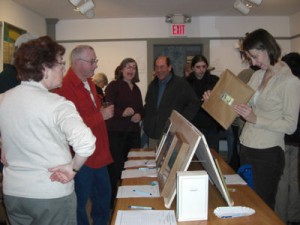 A good crowd turned out for the Library’s Silent Auction

Wayne and Diane Decker immediately responded to the challenge with a generous donation toward the project. Thank you Wayne and Diane! The raffle of a beautiful, hand-stitched quilt donated by Lesley Gray generated over $1,000 more. Lovely gift, Lesley! The Silent Auction held on November 11th proved to be a great afternoon of feasting and good-natured rivalry and brought in more than $3000 toward the O’Connor match. 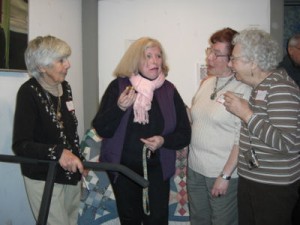 IT RAINED ON OUR PARADE BUT WE HAD FUN INDOORS

In August we applied for two major grants: $99,982.00 NYS Library Construction grant and a $35,000 Green Building Initiative Grant from the Kresge Foundation. To apply for the state grant, we needed a match in the bank beforehand. Walter B. Gladstone, a long-time benefactor of the library, and two anonymous donors stepped up to the plate with $101,000 so we could make the application. This grant has passed two levels of review and is now being evaluated by the final appraisers, the State Dormitory Authority. Keep your fingers crossed!
All new personal donations are fully tax deductible and will be counted toward the O’Connor match.

We don’t often laud our Board of Trustees but here are the visionary and hard-working people behind the scenes: Judy Garrison, Phyllis Galowitz, Michael Passafiume, Deb Stalter, Mary Tucker and me. Our staff and trustees will be happy to answer your questions, and listen to your suggestions and concerns. You are the public in the Andes Public Library and the community in Community Center.

We’re looking for a new Library Director. Gloria, our current Director, feels the need to reduce her hours; Laurie, Assistant Librarian, with two lively little ones, doesn’t want to increase hers, so we will be hiring an additional person to fill the role of Director starting in January. Applicants should send a cover letter and résumé by December 10th, 2007 to Board of Trustees, Andes Public Library, PO Box 116, Andes, NY 13731.~