Morning starts before dawn and this dawn is spectacular as sunlight creeps into the sky. I am perched twenty feet up in a maple tree midway up on the ridge on my property here in Bussey Hollow in Andes. It is the start of what turns out to be a beautiful fall day, October 13, 2007, opening day of bow season for deer and bear. As dawn progressed my mind was fixated on what a lucky person I am. Now in my seventieth year and having spent innumerable hours of those years in much the same context, I thought about all the folks out there who go through their lives without ever connecting with or participating in the natural world. I spend many hours in the forest almost every day of the year and most of those days I am an observer of nature, watching and sometimes photographing the flora and fauna. When fall rolls around I go into another phase and become a participator in the wonderful dynamic we call nature. 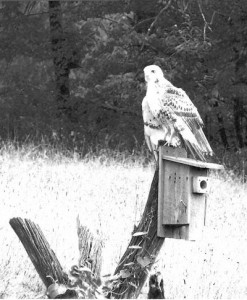 Pictured is a very light colored red tail hawk perched on one of Jack McShane’s blue bird boxes. Remember "Pale Male" of 5th Ave. Manhattan notoriety? Could there be a relationship? The title of this picture should be: "Where have all the bluebirds gone?" Just to let you know, this box housed a bluebird pair that successfully fledged four young earlier in the season and all were safely long gone when Pale Male junior arrived.

At about eleven, close to get-down time, there is action! What appear to be seven shiny black footballs moving over the forest floor in my direction are actually seven large wild turkey toms. I reach quietly and ever so slowly for my bow and position myself for a shot. They split up, with the largest of the group coming directly at me. But of course, there is an obstacle between us. An uprooted tree lies across his incoming path. He could turn left or he could turn right. Left I will have no shot, right there is a small opening that can give me a perfect shot at about twenty yards. He turns right. The big bird stops in the opening. The bow is slowly drawn, steady. I sight the arrow, and he quickly takes two more steps into the safety of the brush. As I ease the bow down I am literally shaking. The top predator has failed once again. This Thanksgiving there will be no free range wild turkey; instead, a store bought, previously caged, hormone injected Butterball. Ah well, a contented wild tom turkey still roaming free, scratching along with his buddies for anything from acorns to sleepy salamanders. See you next spring, pa (hopefully).

There is a sow bear with three cubs that has been frequenting the property. I have seen her twice with cubs in tow. In our last encounter, October 17th, they ambled down to the cornfield that had been harvested, but with quite a lot of remaining corn on the ground. I was in a tree only ten feet up, when at about 6 pm I watched as Momma came down from the ridge with her bumbling threesome. The cubs would race into the field, grab an ear and sometimes a whole stalk, and drag it rapidly back to the safety of the brushy edge. Momma was contented to plop down in the open and munch on whatever was within reach. She was a mere twenty yards from me, this only because the stiff breeze was directly from her to me. A slight whiff of me and they would have been out of there in an instant. One of the cubs actually planted itself right below me as it munched away. After about twenty minutes of this show and with darkness pending, I decided it was time for the show to be over and stated very loudly: “Momma, the show is over and it is time to go!”

I end with a wonderful quote from Ralph Waldo Emerson: “To the attentive eye, each moment of the year has its own beauty, and in the same field, it beholds every hour, a picture which will never be seen again”. This from a really good friend, Joan Miller, who called it “Jack’s View” and hence the title of this article. ~