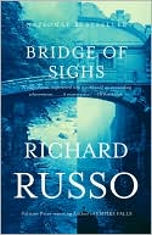 Bridge of Sighs, by Richard Russo

This is a story about an upstate New York town and its people. It is told by 60-year-old Lou C. Lynch, humiliatingly known as Lucy, who has lived all of his life in Thomaston, which is bordered by a river made carcinogenic by the town’s main industry, the tanning of leather. Lucy decides to write a memoir that won’t be more than 50 pages. But as he writes, he fills many more pages about himself, his family, his best friend Bobby Marconi, later known as Robert Noonan, his wife, Sarah, and others who influenced the development of his character and view of life. We learn from Lucy‘s writing that the seeds sown in childhood have far-reaching tendrils into adulthood, that events and influences of those surrounding him as a young boy have repercussions for his future.

Lucy is an optimist like his father whom he loves dearly; none of his mother’s hard-headedness has rubbed off on him. Nothing, he thinks, has changed the fact that he is the boy who stays the same in the same small town well into manhood. Noonan, on the other hand, who has grown up in a very abusive home with a brutal father, sees things differently. He hates his father, but in some ways becomes a gentler version of him. He is not cruel, but he does become a drinker, a womanizer, a betrayer. And a perfect foil to Lucy.

Noonan becomes a famous artist and lives in Venice. He leaves Thomaston far behind rather than betray Lucy by stealing Sarah, who harbors an attraction to him. But Sarah knows where she belongs and to whom. She marries Lucy because she also wants to marry his family, her own having been a disaster as she moves between her divorced parents, an eccentric father and a scattered, confused mother. Interestingly enough, Sarah’s father, who teaches a class on the American Dream, says that our parents are “the first mystery we encounter in a mysterious world.” But there are many more mysteries that fill our lives and leave their mark.

But what does the Bridge of Sighs have to do with these small town people? In Venice it was the bridge condemned men crossed to imprisonment from which there was no escape. It is a reminder of the bridge that crosses the tainted Thomaston stream. Noonan paints it with his father in its shadows, the man from whom he can never escape. Sarah had painted a picture of Lucy’s father’s store with Noonan just about to enter, and years later the same picture, but with a young black girl she has taken under her wing about to enter. What happens to the characters in the time between the two pictures is the bridge that brings them from one point in their lives to the present, when they are all in their 60’s.

Russo is a master at revealing the life and death of a small town and its influences on those who live there. Witness Empire Falls, his Pulitzer Prize winning book. Thomaston is a microcosm of the larger world outside. When the town thrives, the people thrive, except for the minority inhabitants who do not. But things change: the tannery has physically poisoned many people, jobs become obsolete and people must change their habits and ways of living to adjust. Some succeed and move up in life; others do not. “Is this not an American tale?” It most certainly is. ~