I thought that the cedar waxwings had made short work of the viburnum leaf beetle (mentioned in last month’s column). The larvae seemed to have disappeared after those beautiful birds discovered them and nibbled each leaf-full until they were gone. The trees were bare for about three weeks, but then, one day in early July, they began to grow again and by the middle of the month, the shrubs were looking almost lush. Then suddenly I noticed the leaves were looking lacey again. Inspecting them closely, I saw that the adult beetles were covering them and nibbling away. They were working quickly and it appears the viburnums will lose their leaves again. This repeated defoliating will weaken the shrubs and after a period of two or three years, they will die. A number of pesticides may be effective in controlling this pest, none of which I want to use. The other alternative is drastic pruning. Since every branch is affected, this would mean cutting the two shrubs down completely. I will try spraying them first. I did try the least invasive spray first: dishwasher detergent and water. It had only a minimal effect. Paul A. Weston and E. Richard Hoeleke, Department of Entomology at Cornell University, and Brian C. Eshenaur, Cornell Cooperative Extension, Monroe County, recommend acephate, carbaryl, cyfluthrin/imidocloprid, or malathion. It makes me sad to have to part with these beautiful shrubs. Do others in the area have this cranberry viburnum disaster occurring in their garden?

Our children were visiting this weekend and it was a lovely one. Jeff, our daughter Lori’s friend, brought a sprig of forsythia from his 14th Street Community Garden in Manhattan. He had brought me some before and they’re doing well. He planted these in a bare spot on the hill behind the house. It will be beautiful in years to come, providing some early spring color in an otherwise drab spot. Jeff loves gardening and always has some helpful hints for me to use. 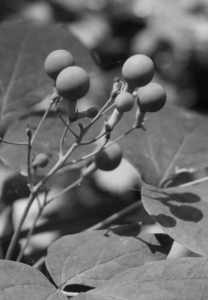 During the afternoon, Jeff, our daughter Amy, and grandson Ian, went for a walk up Crescent Hill. They brought back a magnificent bouquet of wildflowers that made our dinner table very special.

Alan and I had taken a walk in the woods a few days before and discovered a beautiful plant that we were unable to identify. Having my new digital camera handy was great. I snapped a picture of it, in its environment, and took a sprig to show to Amy, my garden maven. She knew immediately that it was blue cohosh (caulophyllim thalictroides).

The weather has been perfect for gardening: rain at night, pleasantly warm during the day, and cool for sleeping. Everything except the viburnum looks lush and healthy. It may be too cool for tomatoes to grow, but then it’s only the middle of July. The bugs have been less bothersome than I remember in previous years, but then again, it’s only the middle of July. Happy gardening! ~