I had been waiting patiently for the cranberry viburnum to bloom when one morning, in early June, the first of the beautiful, lacey white flowers appeared. The two shrubs, each about ten feet tall and each spreading six feet across, play a major role in the garden.

How spectacular they would be, I thought, as I went off to my library volunteer afternoon. I couldn’t wait to come home at 5 o’clock to see how the warm, sunny weather had awakened the blossoms. To my horror, the shrubs had lost most of their flowers and their beautiful, light green leaves. What remained were only the brown skeletons of the leaves and just a small portion of green with the blossoms at the very top. I walked up to examine what had been happening. Every leaf was covered with tiny, green, worm-like creatures. Consulting my trusted laptop, I discovered that the larvae of the viburnum leaf beetle, having entered New York via Canada and having originated in Europe, was making its way to this area. It had emerged and was feeding gregariously on viburnum foliage. It restricts itself to feeding on certain species of viburnum. I found out, to my dismay, that these nasty creatures will defoliate the shrubs, cause dieback, and eventually kill the plants. What a sad day! 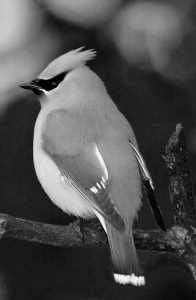 The next day, an even stranger thing happened. I was searching the internet for ways to stop this devastation and save the viburnum, when I noticed that the shrubs were covered by a flock of birds: beautiful, sleek, grey birds, with a crest, bright yellow framing their wings, and the tiniest spot of scarlet on their sides. Out came the Peterson’s guide to identify this bird that I had never seen before. They were cedar waxwings. It took them several hours before they devoured every larva. The whole flock left just as they had come. How had they known where to find these tasty morsels? Mother Nature is so smart!

I don’t know whether those shrubs will grow new leaves. I don’t know if they’re gone forever, but I’m not cutting them down just yet. They stand there, a blight to my garden instead of the centerpiece I expected them to be, but I’m optimistically hoping they’ll come back.

Aside from that sad experience, it’s been a perfectly wonderful gardening month. Now that I cover myself from head to toe to keep the sun’s rays from burning and to keep the bugs from torturing me, I’ve enjoyed the cool, sunny days we’ve experienced in June. The perennials are flourishing. The vegetables have been planted. Every day something new opens, not only in the gardens of Andes, but all along the roads and meadows. Everywhere you look, flowers are blooming; dame’s rockets (locally known as wild phlox), asters, buttercups, Queen Anne’s lace, cinquefoil, wild strawberries, daisies, and so much more, that grow with no help from me, no planning, no watering, no care. We can just enjoy them! ~