Andes once again lost an operating dairy farm when the cows left the Grommeck Acres farm in May, and the equipment was auctioned on June 2. Grommeck Acres, located in Gladstone Hollow, has been operated by the Grommeck family for 3 generations. 65 of the cows were sold to a Pennsylvania Dutch farm near Reading, Pennsylvania; some went to Hamden; and a few stayed in Andes.

Paul and Emma Grommeck, purchased the original farmstead in 1936 from Jim Doig. They milked 12 cows by hand, raised chickens and pigs, and grew a big vegetable garden. Since then, the farm has expanded to its present capacity of 110 milking cows and 90 heifers and calves. 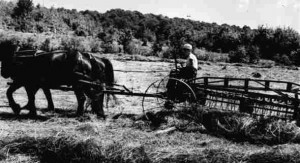 Paul Grommeck, like the many other farmers in Andes, shipped his milk to the Andes Co-operative Creamery in 100lb. milk cans. The milk was cooled at the farm with water from a spring. At the creamery, they were weighed, dumped into large tanks, and processed into butter, powdered milk, or shipped as fluid milk. Dairy farming at that time was quite simple and labor intensive for the whole family. Milking machines and horse drawn implements reduced the manual labor required on the farm.

In 1945 they purchased a tractor. This and other large labor saving equipment made it feasible and more profitable to have larger farms.

As the neighboring farms became available they purchased more land for grazing and crops. In 1947 Paul Grommeck bought Harry Jackson’s farm, which had some sheep, as well as cattle and pigs. It included many acres of woodland located on Mt. Pisgah, which was later developed as Catskill (Bobcat) Ski Center. Later they added farms once operated by Karl Dehmel and Corby Bouton. 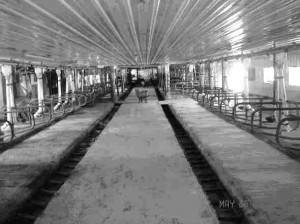 The Grommeck barn is empty

The original Grommeck barn was designed and built to hold two rows of cows on the main level with a very large haymow above. A horse-drawn wagon would be pulled through behind the cows and the manure removed from the gutters using a shovel. Horses would also draw the hay wagons into the haymow driveway and the hay was thrown into the haymow using a pitchfork. Later, tractors and square bales of hay were used causing much greater stress on the barn structure. The use of silos presented difficulties in feeding within the limited space in front of the stalls. The barn was also not suitable for feeding the large round bales, preferred by many farmers. As cows became larger over the years, their stalls were cramped and could not easily be expanded. 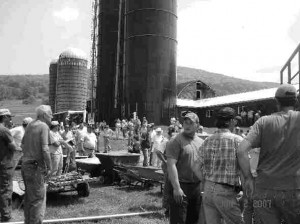 When Paul Grommeck started farming, business transactions were done using cash and deals were made with a handshake. Today’s family farm is a complex business. Financial accounts and records must be kept, bills and taxes must be paid, data on individual cows must be maintained, equipment monitored, and contracts signed. Proper records must be kept for hired labor, contractors, and inspections. Conformance to difficult regulations from the Department of Health and other governmental agencies is required and high tech equipment must be operated and repaired.