The Road, by Cormac McCarthy, winner of the 2007 Pulitzer Prize 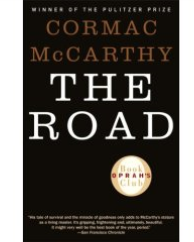 The idea of the world’s end has intrigued many writers, but in their writings almost always, somehow, life wins out. Early novels in this genre were frequently about aliens taking over Earth, but the ingenuity of a few always found a way for humanity to triumph and for civilization to continue. The atomic bomb that brought death and destruction to Japan gave rise to apocalyptic visions that sci-fi writers in particular jumped on.  Add to that the advent of the H-bomb, sophisticated weaponry, space stations, ecological change, terrorism, and the reader is swamped with doomsday tales based on any of these.

Post-atomic period novels dealt with man’s fight to survive the push of the button that would send humanity into oblivion. Yet never have I come across one like The Road. Relentless, harrowing, often terrifying, McCarthy describes a journey, a hopeless one, that a father and son undertake after the button has indeed been pushed, and Earth has become gray with ashes. Nature is devastated and can no longer sustain life; nature that had almost always succored those who protected and cared for it now offered only dust. For the father and his very young son nothing exists except them, the father for the son, the son for the father. They are “. . . each other’s world entire.” And both have to deal with the fact that one of them might die or that they might be separated somehow. They encounter evil on their journey, groups of marauders who loot and ravage the countryside, the cities, the few lone people who walk along the road to nowhere for any means to survive. When food is gone, the slaves taken are eaten. Yet father and son show what is good and beautiful in mankind through their intense love for each other and through compassion for each other and for animals and people they meet on the road. Perhaps that is the purpose of life, along with the need to survive, no matter how it ends.

When the son says they will die, the father, who knows better, tells the boy they won’t. He recognizes final destruction but continues their journey to nowhere. For what? To simply have a purpose, a goal to achieve when they reach their arbitrary destination far far away from where they started? Yes, because that is what humanity must do. It must continue. But he tells the boy that if it comes to it, “I will not send you into the darkness alone.”

Poignant, disturbing, heartbreaking at times, yet the reader recognizes that in love there is a kind of triumph. McCarthy’s visions are frequently grim, but he does see hope and redemption through its power. He juxtaposes what the father and son feel for each other with scenes of the most brutal savagery that others have fallen into, albeit through desperation. Is this a fable or a cautionary tale? I don’t think so. Through McCarthy’s powerful, succinct prose, strong in its descriptions of what is left of the world, and his almost Biblical cadence, we learn that in this case forewarned is not forearmed.

McCarthy, who often reveals the dark side of humanity, shows us here not just the love between father and son, but the father’s fear of his own death, abandoning his son to a terrifying existence. And yet in the face of humanity’s final destruction, he does reveal that love is hope. Perhaps to paraphrase the lines from T.S. Eliot’s The Wasteland, this is the way the world ends, both with a bang and a whimper. And in the case of the father, with courage. ~