Organizing my thoughts on applauding Wilma and Allen, I began by making a list of all the things they’ve done that I have witnessed in the short time that I know them. The list was endless! They are truly community minded people. I became extremely curious to learn what makes some people become so important to a community.

Allen, born in Brooklyn, met Wilma, born in the Bronx, at Hofstra University, in Hempstead, New York. Wilma was sitting in back of this handsome guy who was wearing a beautiful tweed jacket, and smoking a pipe, in the college auditorium. “ It’s not nice to sit with your back to a lady,” she said to him, forcing him to turn around and notice the pretty girl. He was smitten! It didn’t take them long to become a couple. They married and had two boys.

Wilma became a teacher of 7th and 8th grade English and Allen an accountant for CBS.

1978 was a memorable year in their lives. Their house in Commack, where they lived with their sons, Brian, aged 9, and Andrew, almost 13, burned to the ground while the family was at work and school. They lost everything. The community rose to their needs and contributed clothing, kitchenware, and many other things to help them get through a terrible time. They were homeless for six months: camping with relatives, living in a not-so-nice motel room, and spending every weekend looking for another house. Finally they found one in Smithtown, L.I., where they lived until their retirement, many years later.

Two years before, they, with Wilma’s sister and brother-in-law, had bought a ten-acre piece of property with a magnificent view in Harpersfield, New York, near Stamford. The two couples, with their children, spent all of their weekends building a log cabin vacation home with the help of a “how-to” book and by that fateful year of 1978, they were able to camp in the primitive structure. Needless to say, they were fraught with problems. Wind and water plagued them from the start. Materials blew away and water flooded the foundation. The outdoor shower did fine for a while, until new neighbors moved in with a view of the Mazos’ bathroom facilities. They had to read further in the book to learn how to construct a more private arrangement. The family and their friends and even Wilma’s students spent many wonderful weekends at their little cabin in the Catskills.

Wilma loved teaching. I think her love of theater and acting must have contributed to her being a wonderful teacher who enjoyed her students as they did her.

In 1997, they sold their log cabin and found a house in Andes that had another gorgeous view on top of another windy hill. It was just what they were looking for.

Not long after their move to Andes, they came upon Chrissy Calvert, George and Buffy’s very personable dog. Chrissy was responsible for Wilma and Allen meeting George and Buffy and from that moment, they were swept into the community. Andes was growing and Wilma and Allen were good at organizing. Wilma helped to get volunteers for the Thrift Shop. Allen joined the Andes Society for History and Culture, where he introduced the raffle tickets that we still buy from him. He later became a member of the board where he still holds a seat.

They met Bill and Eddie Piervincenzi and together with the Calverts and Frank and Doris Hartung, started a much-needed local paper. The Gazette was born and they all worked hard to keep it going. Eventually, others joined the staff and some of those who started the paper, went on to other things.

When I met the Mazos, they were painting the shelves in the children’s room of the library. The library was another of their projects. Wilma served as Library Trustee, and started a story hour as well as a bedtime story hour with Allen’s help. That story hour has now evolved into a “Babies and Books” hour with Laurie McIntosh’s leadership, as that age group has grown.

The Mazos have certainly done a lot for Andes. You can see them cooking and serving sausages on Community Day, dressed in period costumes. You can see Wilma’s beautiful platters, laden with wonderful foods (sometimes from their own garden), for every occasion. Remember her Heritage Luncheon?  You tasted her chili on Election Day and whenever food was needed, surely Wilma and Allen were and are most generous with delicious delectables!

When it comes to getting into the spirit of things, remember Allen in his ballerina costume one year at the Harvest Moon Ball, and how about this year’s outstanding Robin Hood and his lovely “Made” Marian!

For the past couple of years, they have been going to Hilton Head Island during the coldest months of the winter. We miss them during those times. 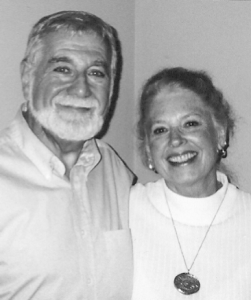 Wilma has become more involved with her interest in theater and Allen has been very supportive and helpful (even taking a part in a play where he was required to drop dead!), and because of their other commitments, Wilma has resigned as trustee of the Library and president of the Gazette. She has been writing and acting and is now writing a new play called “Risk Factors: One, Two, Three” that I’m hoping we’ll all get to see.

The Mazos’ lives have taken a new direction. We’ll miss them, but we thank them most heartily for their contributions to the community and for the new things that they will be doing and we applaud them greatly!~