There was another full house at Andes Town Hall on November 8th when the Andes Town Planning Board met. Art Reed, the board chairman, was joined by Tom Evans, an expert provided by Delaware County to advise our planning board. Seated with the board, and ready to present his views was Mr. Schneider, representing Delaware County Wind Energy, the company that is exploring the possibility of lining our hilltops with giant wind turbines. Marc Gerstman, attorney, representing The Andes Alliance was seated in the audience.

The audience appeared to be made up mainly of Andes residents who were opposed to wind turbine construction. Among them were many members of The Andes Alliance. There were a few impassioned anti-turbine views expressed by members of the audience. If there were pro-turbine citizens present, they were silent during that meeting. A few outraged citizens voiced their dismay at buying homes with magnificent views of mountains, woods and meadows only to have their view threatened by industrial wind turbines. Concern was voiced about financial hardship caused by the drop in property value resulting from this threat.

Mr. Schneider of Delaware Wind Energy LLC gathered his courage and addressed the hostile crowd. Before he had a chance to explain his company’s position, Mr. Gerstman asked to be heard and was granted the floor. Gerstman unfolded what seemed to be a well-planned approach to this controversial issue. He placed two very big stacks of letters on the board’s table. He described them as eight hundred and two letters signed by Andes residents and property owners in opposition to turbine construction that would mar the beauty of our hilltops. The letters, he asserted, were evidence of an overwhelming sentiment in town.

He then approached the board with copies of a proposed Andes Town Ordinance that he asserted was designed to protect the rustic appearance of our landscape. Gerstman distributed copies to each board member, asking for them to be studied and, if approved, submitted to the Andes Town Board. His aim is to have the proposed ordinance made into law by the Andes Town Board. Andes Alliance members feel that this approach would be successful in protecting property values in town.

The balance of the meeting was devoted to a quick review by the board members of the proposed law, followed by questions to Mr. Gerstman about the limits in height, power and location stipulated in the document. There was nothing said about the opinions of those present on the chances of success for this proposed ordinance, and The Andes Alliance, his client, in achieving its goals.

Alliance members are optimistic, believing that they are acting on sound legal advice. There is not much information available about how conflicts are resolved between wind energy companies and local communities. The story that unfolds will be of great interest to other communities being considered as sites for wind turbines.

There were letters put into the public record by the Andes Town Board from property owners wanting to be heard on the wind turbine issue. Six signatures were recorded that were in favor of turbines and twenty were opposed. The eight hundred signatures collected by the Andes Alliance opposing the turbines were not among the letters being considered at this meeting. Supervisor Donnelly, after the meeting, mentioned that the stack of opposing letters and the proposed town ordinance were still under study by the planning board and were not yet examined by the Andes Town Board. He expressed his hopes that the issue will be addressed at the next Andes Town Board meeting. 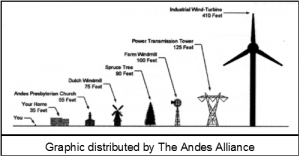 A letter was read by Mr. Fred Cubero and Susan Huot objecting to the appointment of Mr. Winkler to the Andes Planning Board. They claimed that Mr. Winkler is on the board of The Delaware County Electric Cooperative, LLC. The letter asserts that that company is a large shareholder in the Delaware Wind Energy LLC. Delaware Wind Energy LLC is the company that has proposed the construction of turbines in Andes. The Cubero letter called this a conflict of interest and asked that Mr. Winkler be asked to resign since he is an interested party.

Mr. Donnelly said that Mr. Winkler, a town resident, was very well informed and well qualified to offer his views at the Andes Town Planning Board. He will not have a vote on turbine issues when they arise. He feels that because of this, there is no issue of conflict of interest. Listening to Winkler’s views, he said, will make the board better informed on wind energy. If Mr. Cubero would volunteer to serve on the Andes Town Planning Board, Mr. Donnelly said, he would appoint him at the earliest opportunity, enabling him to express his views, too.

Mr. Donnelly said that Mr. Cubero is wrong in presuming that he favors wind turbines. Cubero could not know what Donnelly’s feelings are on the issue since he has not ever expressed his views on wind turbines.

There was an overflowing crowd again at Andes Town Hall. The wind turbine issue was first on the agenda. It was announced that the board had forwarded the draft of the proposed ordinance to Mr. Merzig, the town attorney, for study. As it stood at the end of the meeting, after a bit of deliberation, a workshop was organized to be held on January 13th. After each planning board member has studied the text of the ordinance, questions would be resolved at this meeting. It was suggested that Mr. Merzig be asked to attend to offer whatever help was needed to be sure that the law was worded as intended. After that study and due deliberation, the goal was to have a recommendation for or against adoption passed to the Andes Town Board, along with suggested changes if recommended. On the following day, January 14th, at the Town Board meeting, a decision could be made to call for a public hearing at which questions could be asked by those attending. It would then be possible for the board to vote on adoption of the ordinance.

The latest count, according to The Andes Alliance shows that 1200 signatures were collected opposing large industrial wind turbines in our hills. That is an overwhelming majority of the estimated 1500 residents. Alliance members feel that approval of this ordinance will prevent objectionable wind turbine construction. ~