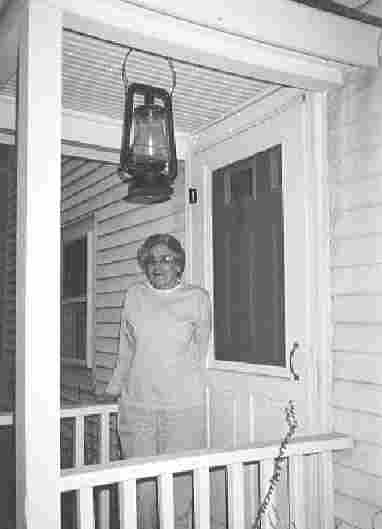 out before her infant gaze, Marj Butler is grounded in the love of her family and has a long, appreciative, and happy outlook on life.

Looking back, she remembers the fun her farm family had skiing headlong from the top of the hill, taking the snow-banked stonewall at a jump and slicing to a triumphant finish in the dooryard. They played ball and pitched horseshoes out back after chores and supper. Their father would join in, even turning on the car lights so they could keep going after dark. Summer evenings when village young people hiked over the hill for a visit, they would sweep out the garage, wind up the Victrola, and square dance. Later, their dad piled the visitors into his pickup and drove them home.

Marjorie’s mother, Mable Worden, married the boy on the next farm, Fred Ruff. They combined the two dairy farms, 360 acres in all. Marjorie Elizabeth, their first baby, had thick, black curly hair. When her grandmother tied it up with a red ribbon, Mr. Woolheater dubbed her then and ever after, “Papoose.” Bill, Carolyn, and Harriet soon joined the family and, twenty years later, Melvin. Tragically, ten-year-old Carolyn was taken from them when her horse shied and trampled her.

The children jogged a mile and a half down hill to a one-room school across from the Ackerleys (Hot Rod Farmer) and trudged back up. It was fun when the snowplow picked them up and dropped them at their lane. One of their teachers, Miss Fletcher, lived where the Doig farm is now. She had taught their parents before them by the same rule: a swift crack on the knuckles of a recalcitrant pupil.

When Marj reached eighth grade, she and the others climbed into a school bus to ride to Hilton Memorial in Andes. That bus! Two benches ran along each side. The boys would get it rocking from side to side until the driver had to stop and restore order. Two years later, when Andes Central School opened, Marj thought it was mammoth and beautiful! She marveled that everyone had a locker to themselves. Such luxury! Until the day Marj opened hers to find a dead skunk inside. Years later, she ferreted out the culprit—a high-spirited lad who (this reporter thinks) probably had a crush on her.

On the farm Marj worked outside and in. From the time she had to stand on a stool to reach the counter, she would knead the bread dough her mother measured into the bowl, shape the loaves and bake them to golden brown. During the summer, dinner was at noon for the haying crew and family. On school days her mother served dinner in the evening: always hearty fare of mostly homegrown meats, fruits, and vegetables.

After A.C.S., Marj took the Home Economics Dietetics course at Delhi Tech, living away from home for the first time. World War II broke out and being a patriot, she pocketed her degree and answered the call to join the war effort, welding airplane parts in the Scintilla plant in Sidney. She worked twelve-hour shifts and lived in a boarding house with several Andes’ girls.

After the war, when Donald Butler, a fellow worker in the plant, returned from service, they married and set up housekeeping in Unadilla. Although they had no children of their own, Marjorie treasures her two stepsons and her many nephews and nieces.

After working at Scintilla (he for thirty years and she for twenty) they pulled up stakes and opened a business in Treadwell. Don was a superb woodworker, creating custom-built furniture, well-designed, with clean lines and a timeless quality. It was always his hobby and he loved it, hardly stopping to eat.

After a few years Don became gravely ill. Because he wanted Marj to be near her family, they bought the oldest house on Andes’ Main Street, exactly suited to their tastes and needs. Marj helped to care for her elderly parents and nursed Don through his final days.

And she invested in the life of her village. Having taught Sunday School in Unadilla, she continued at the United Methodist Church here. She remembers threatening one eight-year-old that if he didn’t sit still, “I’ll come over there and kiss you!” He behaved. She laughingly recalls Christmas pageants when kids, hopelessly wiggly in rehearsal, “went out and performed like angels.” She has also been a Trustee and is active in the United Methodist Women

Marj Butler served on the Treadwell Election Board and was briefly a Democratic Committeewoman here, but it wasn’t her thing. More to her liking was a long and fruitful service on the Andes Public Library Board of Trustees. She was appointed to the Village Planning Board and found the work stimulating: demanding a sharp learning curve and artful diplomacy since the board must sometimes disappoint people when the rules go against them. As “shopkeeper” and Volunteer Coordinator for the Society for History and Culture Thrift Shop, she has thoroughly enjoyed meeting interesting people in a good cause.

After venturing out to the ends of the county, Marj is happy to be back in Andes, snug in her house on Main Street among friends and family. And we are happy to have her here. She enriches us by her vitality, her balanced perspective and deep down enjoyment of life. ~